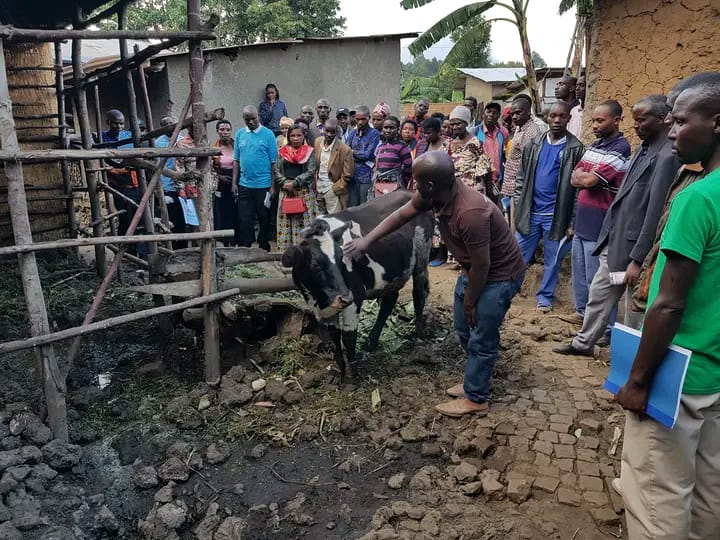 The Rwanda Animal Welfare Organization (RAWO) is a non-governmental organization (NGO) based in Rwanda. It comprises animal welfare enthusiasts—mainly but not exclusively, veterinarians and public health professionals. Its programmes are designed to serve the wellbeing of both humans and animals.

The RAWO, in cooperation with WTS-Animal Welfare Charity Organization from Germany, has been in formal cooperation since October 2021. It is from this framework that RAWO has been funded by WTS to conduct the project entitled ‘’Raising Animal Welfare Awareness for Livestock Farmers in Musanze District.” From February 2022 until July 2022, 489 livestock farmers from 5 sectors have been trained. On 16 July 2022, The Director of WTS Mrs Karin Siegmund and Dr  Paul Ssuna, a WTS consultant  came to Rwanda to visit and monitor the ongoing project  in Muko sector where she have seen how the trainings are being conducted and how the farmers are  learning practically how they should take good care of their animals by fulfilling  the  Five freedoms of animals.

The five freedoms of animals include freedom from hunger and thirst by having ready access to fresh water and diet; freedom from discomfort by providing an appropriate environment including shelter and a comfortable resting area; freedom from pain, injuries, and diseases by preventing or rapid diagnosis and treatment of diseases; freedom to express normal behavior; and freedom from fear and distress by ensuring conditions and treatment which avoid mental suffering .

During the training, the farmers learned theoretically and practically how to implement those Five Freedoms by visiting one of the livestock farmers and his animals in the Muko sector. The farmers learned the impact of those five freedoms on their livestock production, which consequently fit the government program for social economic transformation and poverty reduction.

Dr. Jean Claude Masengesho, the Director of RAWO, emphasized that the Five Freedoms of Animals are internationally recognized as key in assessing the wellbeing of animals and that it is the responsibility of all humans to fulfill them.

Furthermore, the livestock farmers were trained basically on the dangers of antimicrobial resistance, responsible use of antibiotics and the One Health concept, where animals, humans and the environment should live in harmony for sustainable development.

Dr. Jean-Claude emphasized that farmers are not allowed to give any medicine or antibiotics to animals without the intervention of a certified veterinarian or veterinary technician.

Bernard Mbarushimana from Muko Sector pledged to share knowledge with their neighbors.

“We used to hurt our animals unwillingly by beating them, depriving them of water due to its shortage, and necessary medical treatment.” Now we have learnt more so that we can respect their wellbeing and share that experience with our neighbors, “he said.

The Director, Karin Segmund, from the WTS-Animal Welfare charity organization from Germany, greatly appreciated RAWO for doing a great job, promising that they would keep supporting RAWO in order to expand this great work to other districts of Rwanda.

Dr Ssuna Paul, a consultant from WTS, congratulated RAWO for the great work they are doing to advance animal welfare in Rwanda, saying that there will be a positive impact afterward. For him, it was enriching and it will improve the way farmers treat their animals, so production will be increased.

“I am actually very happy and generally optimistic that this program will change a lot about the welfare of animals in all of Rwanda,” he added.

The District Animal Resources Officer of Musanze District urged the livestock farmers to treat their animals well by implemeting the learned skills, building shelters for the animals and respecting all five freedoms of animals , especially the ones stating freedom from hunger and thirst, by enhancing access to fresh water, as in the area it is a bad habit for farmers to not give fresh water to animals regularly.

RAWO has the target of training about 1800 livestock farmers through this project funded by WTS.