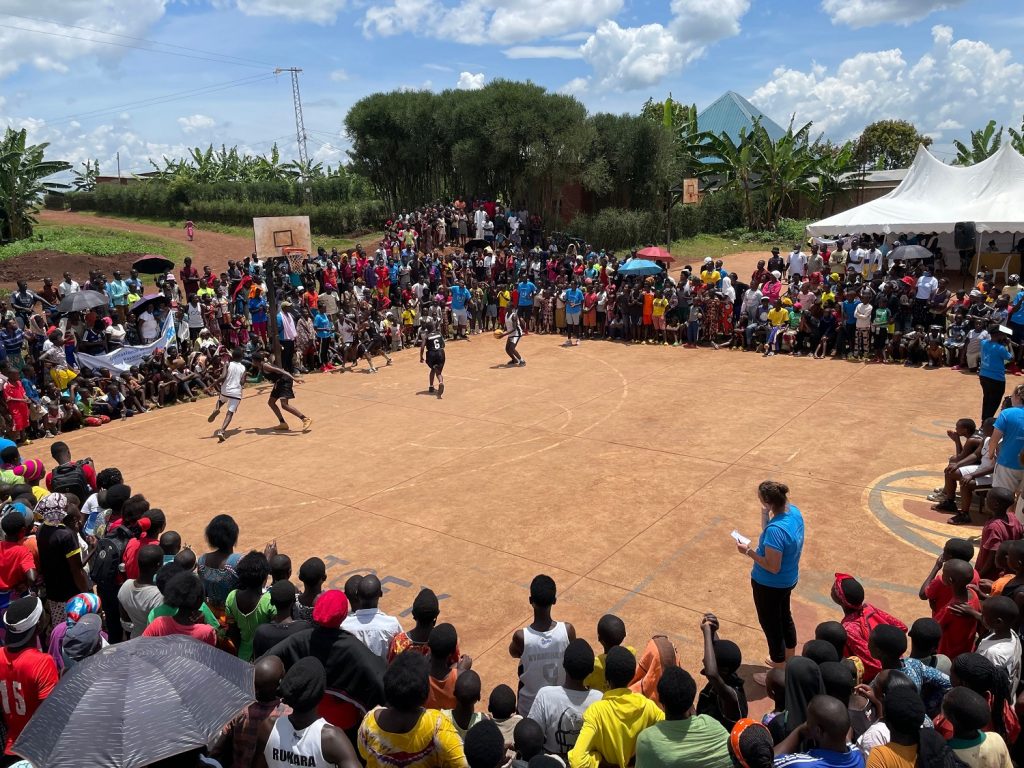 In honor of International Women’s Day (IWD), Shooting Touch Rwanda (STR) hosted a community-wide celebration, utilizing the power of sport to recognize and uplift the remarkable women of Rwanda. The celebration, held on Sunday, 27 March from 8:00am to 2:00pm in Nyamirama Sector, consisted of a 5km car-free zone march, basketball tournament, community health education, and free health testing.

In celebration of International Women’s Day, STR brought together people of all ages from across Kayonza District to celebrate women, advocate for gender equity, and speak out against gender-based bias and discrimination. The event featured a series of speeches from special guests and community leaders, including representatives from Kayonza District and Paper Crown Rwanda, which provided community members in attendance with valuable education related to gender equality, community health, and the value of sport.

“International Women’s Day is a great platform to celebrate the well-being and social life of women, and the role of women in the development of their societies,” said Harelimana Jean Damascene, the Vice Mayor of Kayonza District in charge of social affairs, who attended and spoke at the event. “Shooting Touch’s impact in Eastern Province has really increased the participation of women in sport. They provide health education, health insurance, and help in managing family conflicts through mentorship sessions.”

The event began with the 5km march through a car-free zone stretching from Kayonza to Nyamirama, providing the extended Shooting Touch Rwanda community with an opportunity to come together and celebrate International Women’s Day. People of all ages and genders joined with enthusiasm; hundreds marched, sang, and danced through the streets of Kayonza alongside their friends and families. Leading the charge was a group of talented female drummers from Rwinkwavu.

Following the march, Shooting Touch Rwanda presented a 3-on-3 basketball tournament featuring players from four STR communities in Kayonza District: Mukarange, Nyamirama, Rukara, and Rwinkwavu. The tournament was very competitive and spirited, with Rukara winning the U13 (boys and girls) and Women’s Division Championships, and Nyamirama winning the U18 Boys’ and U18 Girls’ Division Championships. At the end of the event, Shooting Touch Rwanda’s team of coaches handed out “Most Valuable Leader” awards to three local women, recognizing their impressive leadership both on and off the court.

“Sport can be used to break the bias,” said Clementine Nyirarukundo, Program and Partnerships Manager at Paper Crown Rwanda, a local nonprofit that works with STR girls and boys to transform gender norms, foster leadership, and create lasting social change. “It is not common in Rwandan communities to see women participating in sport, and we are pleased to partner with Shooting Touch to break that gender norm. This [International Women’s Day event] is an opportunity to remind people that [women] are equal, we have the same rights, and we can break any bias that doesn’t go along with what we believe as a nation or as a community.”

Throughout the event, free testing for HIV, other sexually-transmitted diseases (STDs), and noncommunicable diseases (NCDs) was available to thousands of community members. “We partnered with Nyamirama Health Center to make sure that everyone who was here today was able to learn their health status in terms of HIV, gonorrhea, and syphilis. We also tested for NCDs such as diabetes, blood pressure, and so on,” said Christelle Umuhoza, Shooting Touch Rwanda’s Program Director. “This is very important, especially for our women who have a higher rate of HIV and STDs in Rwanda, because we want them to know where they stand so they can receive any intervention they may need.”

For many STR beneficiaries, the lessons they have learned through basketball have changed their lives for the better and shifted how their families and communities think about gender norms.

“When I started playing basketball with Shooting Touch in 2016, I was very shy,” said Nyiraneza Patience, a woman from Rwinkwavu. “I used to have muscle pain and was at-risk for high blood pressure, but when Shooting Touch came, I changed my lifestyle – the basketball I play is like medicine for my life. Shooting Touch provides us with health insurance, and teaches us to save money through our Women’s Cooperative groups. They empower us as women and our lives have changed remarkably. Also, Shooting Touch helped my family to become more equal; since joining this program, my husband started helping out with different duties at home.”

“Shooting Touch taught us that we are equal to girls, that they can do what we do,” shared Bosco Kwizera from Mukarange, who played in the U18 Boys’ tournament on Sunday. “Before, I thought that basketball was a tough game and that girls couldn’t play, but now I am aware that girls are capable and I am proud when I see them competing with determination and confidence.”

Shooting Touch Rwanda continues to use the power of sport for the greater good throughout rural areas of the country. With plans to expand into a new village within Rwanda’s Eastern Province in late 2022, the mission of educating and inspiring individuals, families, and entire communities to live healthier lives will continue on.