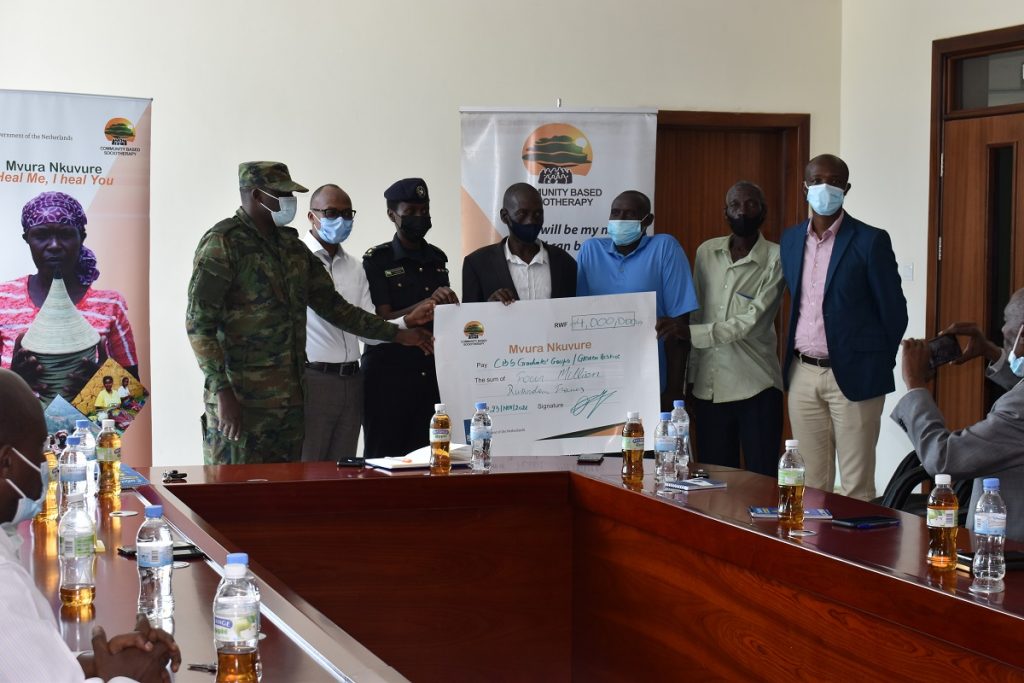 Fifteen graduate groups of beneficiaries of the community-based sociotherapy approach, known as Mvura Nkuvure (heal me, I heal you), have received boosting funds from CBS Rwanda, in Gasabo District.

Community Based Sociotherapy (CBS Rwanda) as an organization, was initiated in 2016 to improve psychosocial wellbeing and to strengthen interpersonal reconciliation and social cohesion at the grassroots level countrywide.

“My group has 25 members. Our daily common activity is beekeeping. We will use this fund to expand our investment in breeding bees to make sure we increase honey production,” said Ismael Mutavuka, from Rusororo Sector-based graduate group dubbed Tuzamurane.

Another beneficiary who expressed his appreciation is Pangaras Ushirubwoba, representative of Abunze ubumwe Kabuga II, who said: “We have planned a project to start breeding goats. We will buy goats, breed them, and with this fund, we will be able to take all needed care of the goats.”

Speaking to the media amid the event held on November 23, 2021, Diogene Karangwa, Mvura Nkuvure Project Coordinator at CBS Rwanda, who acknowledged the support beneficiaries for having gone through the healing and their reconciliation journey, said that this funding comes in line with helping them cope with economic setbacks that have hit the world especially during the hard time of COVID-19.

“We have provided them with the economic developing boosting fund. As you know there are COVID-19 effects and other economic setbacks worldwide. We have supported them to reinforce their daily activities in groups, after completing sociotherapy,” said Karangwa.

He added that from December 2021, the project will be supporting more groups countrywide, targeting 194 graduate groups in total.

“It is still a pilot project, because we have been focusing mainly on healing and reconciliation. But now we are looking at how we can holistically support the groups and integrate socioeconomic component in what we have been doing,” he said.

Kimenyi Burakari, the Director of Education in Gasabo District, said: “We expect a lot from these supported groups in terms of their socioeconomic trend. We hope that this fund will boost their activities. We encourage them to remain truly reconciled, and build on it to keep moving forward towards the common wellbeing”

Mvura Nkuvure, which is a sociotherapy approach that has served to facilitate the psychosocial reintegration of (ex-) prisoners, whereby survivors and perpetrators have reconciled, has been implemented in Rwanda, since 2004.