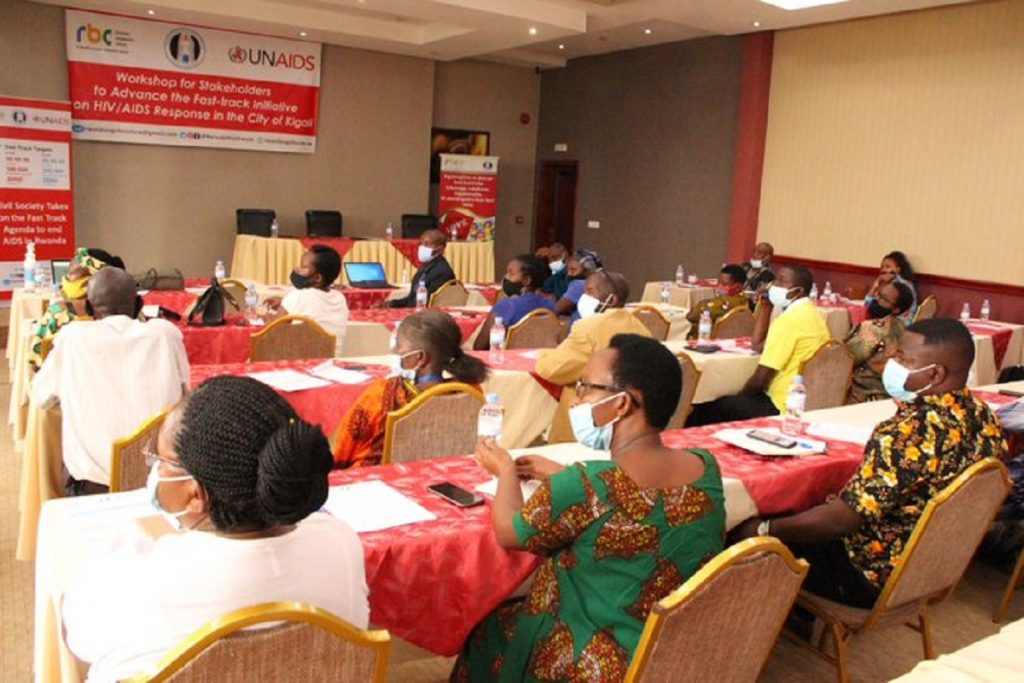 The discussion was held during a workshop for Stakeholders and peer Educators to Advance the Fast-track Initiative on HIV/AIDS Response in the City of Kigali which took place on October 23, 2020, organized by RNGOF on HIV/AIDS and HP with the technical and Financial support of UNAIDS, with ambition to sensitize members of key population, health care providers, and CSOs to respond to HIV testing and counselling and contribute to ending AIDS among key population.

“HIV/AIDS is still there; it has not disappeared yet. So, here we look at what we can we do to halt its spread. Because by stopping its propagation, we will be contributing to the development of our nation.” Said Nooliet Kabanyana, Executive Secretary of RNGOF on HIV/AIDS HP During her opening speech.

According to Aimable Mwananawe, National Coordinator at Ihorere Munyarwanda Organization (IMRO), Non-Governmental Organizations are always committed to playing a part.

“The contribution of civil society organizations especially Rwanda NGOs Forum on HIV/AIDS and Health Promotion is to back the government strategic plan against the spread of HIV/AIDS in the country but now specifically in Kigali City. Key populations are our main target as they are the most affected groups in terms of HIV prevalence.” He said.

He added: “Our contribution is basically bound on: legal aid in terms of advocacy to make sure each key population is assured with health service provision; sensitization; doing what we call linkage, between health care beneficiaries and health care providers to make sure the service is genuine; and doing some data reports regarding HIV prevalence, all in partnership with different stakeholders.”

“What we do, as SFR, is to prevent from new infections by mobilizing key populations for voluntary HIV testing, respond to treatment and get rid of unprotected sex by using condom. We usually advocate for key populations that they may turn to improved living conditions through having occupations that generate income for their wellbeing which would be a good way to mitigate their exertion in spreading HIV/AIDS.” Said Jean-Jacques Ndayisenga, project manager at Strive Foundation Rwanda (SFR), specifically on the project ‘HIV prevention’.

The Rwanda Demographic and Health Survey (RDHS) 2014-15, shows that Rwanda’s HIV prevalence has been stable since 2005 and remains at 3 percent among adults aged 15-49 years (4% among women and 2% among men). Behavioral surveillance Survey (BSS) 2015 shows that HIV prevalence in Sex workers is at 45.8%.

Amid the event, Jean de Dieu Nyagahinga, Director of health unit in Nyarugenge District said: “We, as local government authority, base our efforts on mobilization campaigns that reach citizens in general. we organize free HIV testing campaigns. There is still a concern of HIV positive people who don’t respond well to treatment, we take this opportunity to call them on respecting the treatment regularity. We appreciate the way these NGOs help us discover the best ways to reach key people through sensitization and other programs.”

Besides, in his presentation about – HIV prevention, testing and counseling, and adherence to treatment among Key Population, during the event – Rwanda Biomedical Center (RBC)’s representative Jean Pierre Ayingoma, acknowledged the contribution of NGOs in advancing the fast-track initiative on HIV/AIDS response especially in the City of Kigali.

“I thank very much NGOS Forum for the contribution in health sector. RBC appreciates the collaboration between the forum and the Rwanda health sector. Civil society is our stakeholder and by that partnership we come up with a strong unity in advancing the fast-track initiative on HIV/AIDS response in the city of Kigali.” Mentioned Ayingoma.