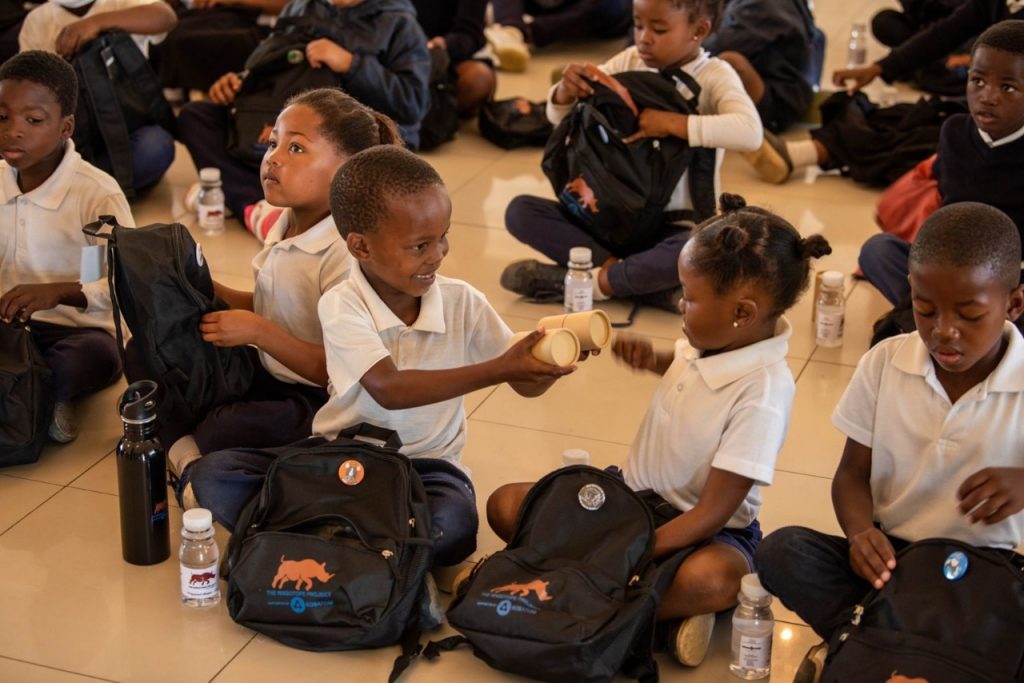 From supporting schoolchildren in the low-income communities to saving rhinos – Rosatom has launched a number of social initiatives in Sub-Saharan Africa. Let’s recap the most remarkable projects of 2021.

In September, the first phase of the Rhisotope Project was successfully completed. The research initiative brought together South Africa, Australia, the USA and Russia. It is a unique partnership, which aims to fight rhino poaching in South Africa with the help of nuclear energy.

South Africa is home to 90% of the global population of rhinoceros. These animals are hunted for their horns although trade in rhino horn is banned internationally. In 2010–2019, more than 9,600 rhinos were killed by poachers in Africa.

To fight poaching, the initiators of Rhisotope Project suggested implanting a radioactive isotope into the rhino horn in the amount that will do no harm to the animal. First, it will be almost impossible for such a horn to be taken out of the country as it will be easily detected at any border crossing. Second, there will be no demand for isotope-marked horns.

In May, the first phase of the project was completed: subsequent tests confirmed that the procedure is absolutely safe for the rhinos as radioactive isotopes do not penetrate into the animal body.

“The Rhisotope Project has reached the first major milestone in being able to demonstrate to the regulator, the university’s animal ethics committee, and stakeholders in the welfare of rhinos that it is completely safe for the animals”, said Dr. James Larkin, Director of Radiation and Health Physics Unit at the University of the Witwatersrand and the founder of the Project.

The researchers have proceeded to the second phase, radiological dose simulation, which will take place in 2022.

However, making scientific discoveries that can deal with a problem and save the species is only part of the deal. Another important job is to engage with the locals to help raise awareness of the issue.

This November, Rosatom in partnership with La Pieus (LPA) began installing aquaponic greenhouses in the town of Paterson (Eastern Cape Province, South Africa). They are expected to improve nutrition in the town: food from the greenhouses is supplied to the families of volunteers who help fight poaching, as well as to a local canteen, an orphanage and nearby hotels. Proceeds from sale of the food will also finance the improvement of living conditions for the local residents.

“Aquaponics is the most innovative farming method of the new century. This system gives you the opportunity to process food in your backyard and generate income. One system can feed a family of four to six people sustainably”, said the CEO of LPA, 18-year-old eco activist Rikalize Reinecke, who started her own aquaculture and aquaponics farm in 2014.

An aquaponic greenhouse is a closed ecosystem combining aquaculture (raising aquatic animals such as fish, snails or prawns) and hydroponics (growing plants in a mineral water solution). An aquaponic system needs no chemical fertilizers – conversion and cleaning processes inside it run naturally.

In addition, lectures were held in a local school, at which experts told schoolchildren about human-environment interactions and wildlife conservation initiatives.

Rosatom carries out other socially important projects, too. This can be illustrated by an initiative aiming to overcome the stigma of menstruation.

According to experts, around 7 million South African girls miss school for one or more days every month (up to 20% of the total school time) when they have a period, and some of them even give up studying. In addition, many girls cannot afford sanitary products due to the ‘pink tax’ (an upcharge on products intended for women). As a result, the so-called ‘period poverty’ prevents girls and women from studying and working.

In October 2021, Rosatom began to support girls from Mpuluzi Secondary School in Mayflower, Mpumalanga Province. Together with the South African Ministry of Tourism and the Embassy of Russia to South Africa, Rosatom donated 180 reusable sanitary kits with a storage life of five years – a safe and sustainable solution to the problem. The girls were also given a lecture on women’s health and nutrition.

“My country has never been indifferent to the fate of African nations. In the past, Russia assisted African nations in their struggle for liberation and against oppression. Today, albeit in a small way, we pledge our support in liberating young African women. I believe it is our common duty to help our children to walk this thousand-mile path as long as we can because we attach our best hopes for a better future to our children and the generations to come,” Ilya Rogachev says.

The biggest problem of period poverty is that women have to choose between buying food and buying period products and it shouldn’t have to be a choice. The other issue is silence. Not enough people or companies talk about it. By supporting this initiative, Rosatom is not only helping girls, but also raising awareness.