RUBAVU: Drug dealers arrested with over 1,900 pellets of cannabis 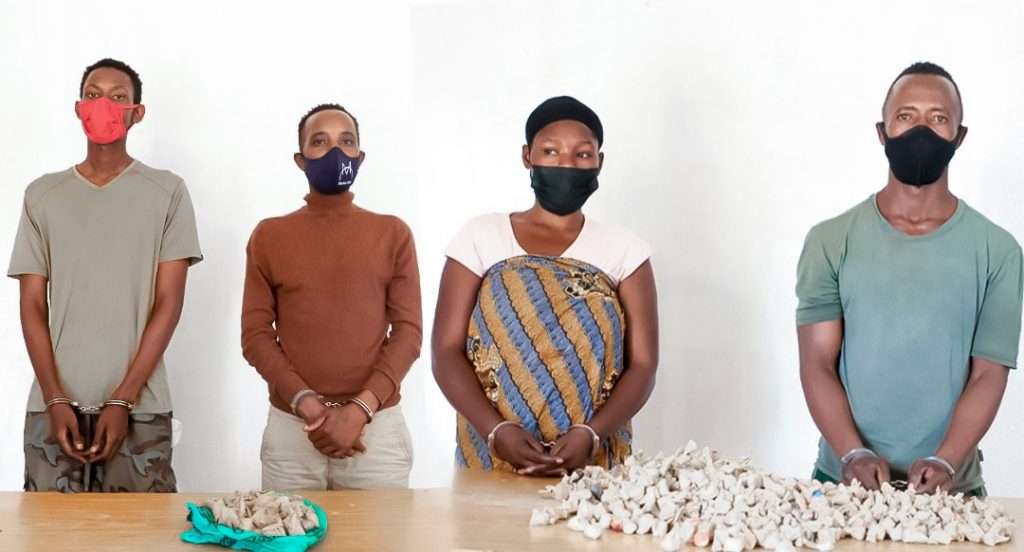 “One of the suspects; Jean Baptiste Musheberejiki, 47, identified to be a major drug dealer, was arrested in the wee hours of Thursday at his hime in Kabirizi Village, Rwanzekuma Cell of Cyanzarwe Sector with 521 rolls of cannabis,” said CIP Karekezi.

“Later on at about 2pm, two other suspected drug dealers identified as Jesus Techin Kirura, 22, a Congolese national, and one Serge Gihana, 37, a Burundian national were arrested with 40 pellets of cannabis in Amataba Village, Bugoyi Cell of Gisenyi Sector.

Two other drug dealers; Claudine Murekatete, 30, and a Congolese national only identified as Shukuru, were arrested with 1,350 pellets as they headed to Majengu Village, Umuganda Cell also in Gisenyi Sector, where it is alleged they were going to supply their clients.”

He commended residents, who continue to share information on suspected drug dealers, which facilitates successful operations.

The suspects were handed over to RIB for further investigation.

The Ministerial order nº 001/MoH/2019 of 04/03/2019 establishing the list of narcotic drugs and their categorization classifies cannabis in the category of “very severe narcotics.’’

Article 263 of law No 68/2018 of 30/08/2018 determining offenses and penalties in general states that any person, who unlawfully produces, transforms, transports, stores, gives to another or who sells narcotic drugs and psychotropic substances, commits an offence.

Upon conviction for “very severe narcotics,” the offender faces between 20 years and life imprisonment, and a fine of between Frw20 million and Frw30 million.