Assorted narcotic drugs disposed of in Nyamasheke and Nyagatare 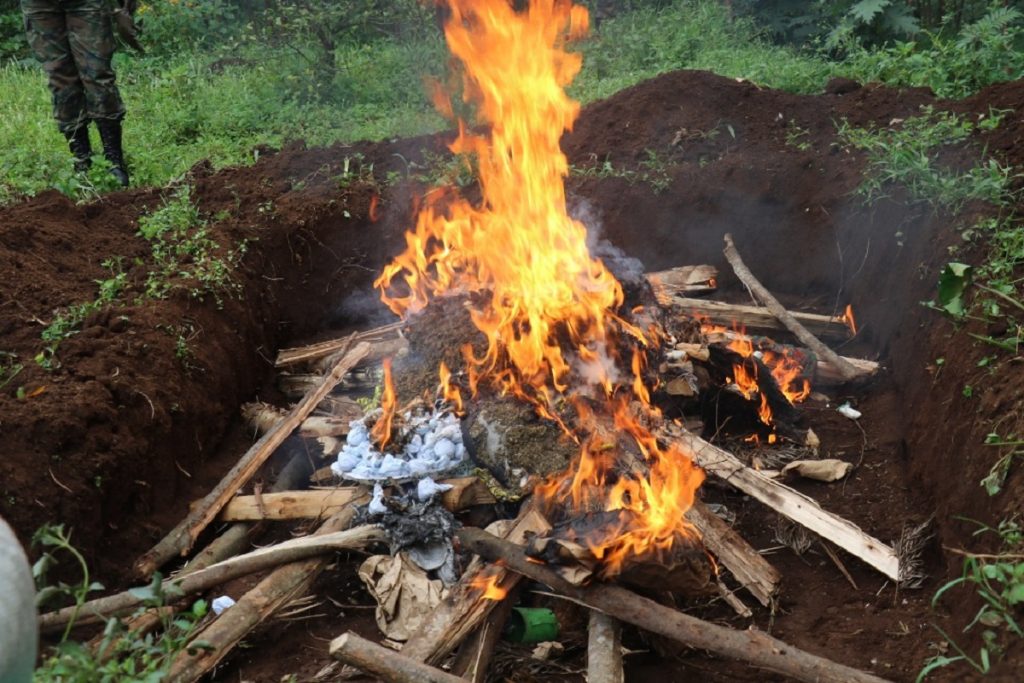 Assorted narcotic drugs, including 200kgs of cannabis and 1,120 litres of kanyanga, an illicit crude gin have been disposed of in Nyamasheke and Nyagatare districts, respectively.

The destroyed narcotics were seized in varied Rwanda National Police (RNP) conducted in the two districts.

The separate public destruction exercises were witnessed by the Police, prosecution, RIB and local authorities.

In Nyamasheke, the destruction exercise was held on Tuesday, February 16, in two separate sites in Ruharambuga and Bushenge sectors.

Also disposed of in Nyamasheke include 180kgs of assorted skin bleaching products and 100kgs of pharmaceuticals.

The skin bleaching products are labeled illegal under the ministerial order determining the list of cosmetics, whose use is prohibited in Rwanda; the law on organization, functioning, and competence of the Council of Pharmacists; and the law relating to the regulation and inspection of food and pharmaceutical products.

The products contain chemicals such as mercury and hydroquinone, which can cause liver damage, reduce resistance to bacterial and fungal infections, and increase anxiety, according to the World Health Organization.

“The narcotics, banned skin whitening products as well pharmaceuticals were seized from drug dealers and smugglers during separate operations conducted between 2018 and 2020,” CIP Bonaventure Twizere Karekezi, the Police spokesperson for the Western region, said.

According to CIP Karekezi, those arrested include major drug dealers some of whom were intercepted as they crossed into Rwanda from the DR Congo while others were still in transit to supply other dealers in different parts of the country including in City of Kigali.

In Nyagatare District, other destroyed products include 5,200 bottles of Soft gin, 1,034 bottles of Kambuca drink, 1,910 sachets of maisha bola and 736 cartons of plastic bags.

According to CIP Hamdun Twizeyimana, the Police spokesperson for the Eastern region, the destroyed drugs in Nyagatare were seized from traffickers in separate operations conducted last month in the sectors of Mimuri, Gatunda, Rwempasha and Nyagatare when tens of traffickers were arrested.

Illicit gins are mainly trafficked into Rwanda from the neighbouring Uganda through porous borders.

The spokespersons commended the role of communities in the two districts, who reported drug traffickers and smugglers and facilitated successful operations.

“These are results of community policing and strengthened operations targeting major dealers including trafficker and local distributors aimed at breaking chains of supply, and bringing these dealers to justice,” CIP Karekezi said.

Cannabis is listed among “very severe drugs” in Rwanda with anyone convicted for this crime facing between 20 years and life in prison and a fine of up to Frw30 million.