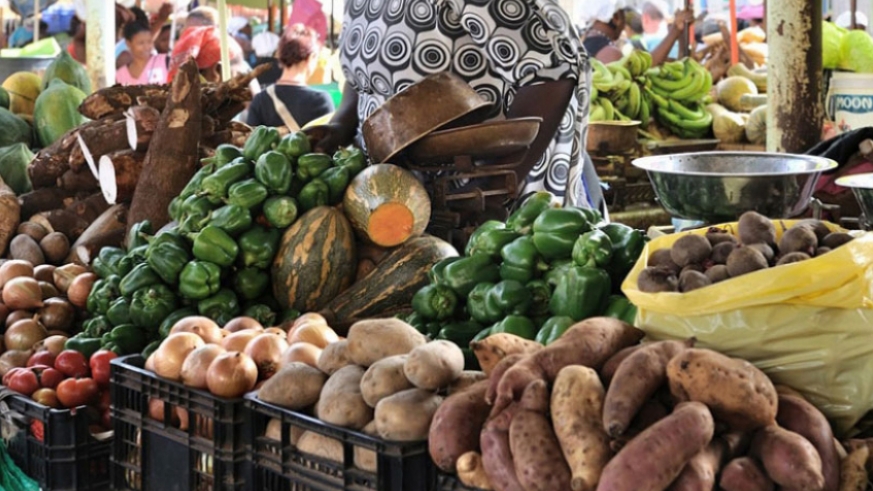 The Ministry of Trade and Industry has set maximum quantities of foodstuff that a buyer should not exceed in a bid to prevent people from accumulating large stocks of food.

This action has been prompted by the shopping frenzy that Rwandans embarked after the government announced a countrywide lockdown in an effort to combat the Novel Coronavirus – COVID-19.

According to the directive enforcing the lockdown, markets selling foodstuffs and other essential commodities will remain in operation, but this did not stop people from panic buying, stock-pilling groceries.

The food limits were set along with tariffs on different commodities so as to prevent traders from hiking prices.

Soon after the Prime Minister issued a statement announcing the lockdown on Saturday evening, throngs of people were seen at different grocery stores around Kigali, many buying different commodities in large quantities.

On Sunday morning, The New Times visited Agakiriro market in Gisozi sector and observed the same thing. The number of buyers was so high.

During an interview, Hellen Ishimwe, one of the vendors in the market said that the influx of buyers had been high since the night before, immediately after the lockdown was announced.

“As you see, the number of buyers have increased. On the normal days, it was so rare to observe the market overcrowded, but now each shop has three or more clients at a time,” she says.

In an interview with The New Times, several buyers said that they had taken the initiative to avoid unnecessary movements during this lockdown.

“All we are doing, is to make sure we reduce movements during this period, and avoid buying later consumables whose prices might be hiked anytime”, Elisee Rwigema talking to The New Times.

Speaking during a live talk show, Anastase Shyaka, the Minister of Local Government called for calm saying that panic buying can potentially lead to other problems like unnecessary shortage of essential commodities.

“There should not be any cause for panic. These measures were carefully thought out. People will not lack the essential services or items like food and medicines,” he said.

According to Soraya Hakuziyaremye, Minister of Trade and Industry, there is no food shortage.

“I would like to assure Rwandans that there is no shortage of food.  Most of the foodstuffs we have are produced from here in Rwanda. Farming activities have not been stopped, and so is harvesting,” she said, adding that transportation of produce and other commodities remain unhindered.

On imported commodities such as rice, sugar, cooking oil among others, she said that there might be delays because of the [lockdown] measures that other countries put in place.

“It is true that there are commodities that might delay because of the [lockdown] measures that countries put in place in this month. But, we are discussing that issue with the private sector federation so that we do not run out of stock,” she said.

“Last week, they (the private sector) assured us they have stock to feed the country for at least two months. So, I think we have not yet reached a stage where there is food shortage,” she said.

According to the minister, panic buying, if it remains unchecked will deplete the available stock before the imports can get into the country, which could lead to a crisis.

“That is why we have set the food purchase limits on different items so that people buy responsibly and be reassured of food availability,” she said.

She added cargo air flights are still permitted, and both the Ports of Mombasa, and Dar-es-Salaam which are used to transport goods into Rwanda are still operational.

However, people who called in during the talk expressed concern that prices continue to rise despite a price ceiling imposed by government while others wondered whether, for instance, a person cannot buy a sack of 25 kilogrammes of rice at once.

Hakuziyaremye warned that the government will impose heavy punishments on those who seek to get undue benefits from the coronavirus outbreak.

“A person who is caught selling food items at higher prices than those legally set has to reimburse the buyer the extra amount, and is fined up to Rwf5 million, or even have their trading licence withdrawn,” she said.

“We told trade inspectors to enforce such penalties…we cannot accept that businesspeople exploit residents, yet they can get benefits even from the prices we have set,” she observed.

So far, more than 340,000 people have contracted the Novel Coronavirus, while nearly 14,000 have died from the virus worldwide, according to a tally by Johns Hopkins University, a US-based research university which tracks COVID-19 cases.

In Rwanda, there are 19 cases as of Sunday, but no death has been recorded and the ministry of health says all the patients are responding well to the treatment.