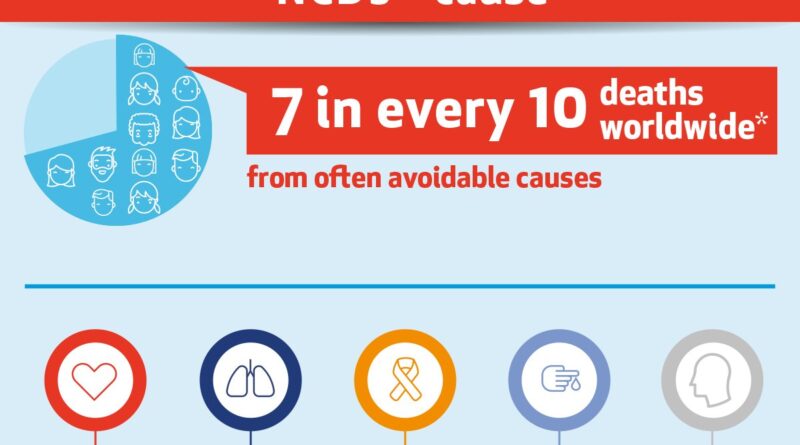 Noncommunicable diseases (NCDs), also known as chronic diseases, tend to be
of long duration and are the result of a combination of genetic, physiological,
environmental and behavioural factors. The main types of NCD are
cardiovascular diseases (such as heart attacks and stroke), cancers, chronic
respiratory diseases (such as chronic obstructive pulmonary disease and
asthma) and diabetes. NCDs disproportionately affect people in low- and
middle-income countries, where more than three quarters of global NCD deaths
(31.4 million) occur.
Rwanda’s population stands at 12.4 million people, as of 2019, with an annual
growth rate of about 2.1 percent. The population pyramid shows a relatively
young population, expected to record a marginal shift by 2030. The total
fertility rate declined from 5.7 to 4.0 children per woman between the years
2000 and 2018. Over the same period, average life expectancy at birth
increased from 47 years to 69 years, denoting an ageing population. This
indicates increased risk of NCDs.
The burden of NCDs in Rwanda has increased tremendously over the years. In
2018, the Institute for Health Metrics and Evaluation (IHME) noted that NCDs
are significant contributors to health loss in Rwanda, accounting for 35 percent
of DALYs in 2016, up from 16 percent in 1990.
WHO estimates from 2016 show that NCDs accounted for 44 percent of total
annual mortality in Rwanda, with CVDs and injuries the single largest shares of
NCD-related mortality (both 14%), followed by cancers (13%), CRDs (3%),
diabetes (2%) and other NCDs (13%).

People of all age groups, regions and countries are affected by NCDs. These
conditions are often associated with older age groups, but evidence shows that
17 million NCD deaths occur before the age of 70 years. Of these premature
deaths, 86% are estimated to occur in low- and middle-income countries.
Children, adults and the elderly are all vulnerable to the risk factors
contributing to NCDs, whether from unhealthy diets, physical inactivity,
exposure to tobacco smoke or the harmful use of alcohol.
These diseases are driven by forces that include rapid unplanned urbanization,
globalization of unhealthy lifestyles and population ageing. Unhealthy diets and

a lack of physical activity may show up in people as raised blood pressure,
increased blood glucose, elevated blood lipids and obesity. These are called
metabolic risk factors and can lead to cardiovascular disease, the leading NCD
in terms of premature deaths.
Modifiable behaviours, such as tobacco use, physical inactivity, unhealthy diet
and the harmful use of alcohol, all increase the risk of NCDs.
The Rwanda Ministry of Health (MoH) Non-Communicable Diseases Risk
Factors Report from 2012 shows that the main risk factors are the harmful use
of alcohol and an unhealthy diet, followed by tobacco use. Physical inactivity
and obesity were not presented as major risk factors in Rwanda in the report.
However, cases of obesity are increasing. In Rwanda, the overall prevalence of
alcohol drinkers is estimated at 41.2 percent (males 52%, females 31.4%).
Overall fruit and vegetable consumption in Rwanda is very low, 99.6% of the
population consumed less than five servings of fruit per day and 99.3 %
consumed less than five servings of vegetables per day.
In Rwanda, adult tobacco smoking prevalence stands at 12.8 percent with
variations in age and sex. Male smokers accounted for 19.1%, while females
accounted for 7.1%. Smoking prevalence also varied by residence with the
highest prevalence reported in rural areas (13.5%), followed by semi-urban
(12.0%) and urban areas (9.7%).
In Rwanda, 61.5% of the population have high levels of physical activity;
25.2% moderate levels and 13.3% have low levels of physical activity. STEPS
2012-2013 found that 2.8 percent of Rwanda’s population are obese, 14.3
percent are overweight and 7.8 percent are underweight. Obesity is most
prevalent in the age group 35-54 and among females (4.7%). Furthermore, the
prevalence of obesity is more predominant in urban areas (10.2%), and Kigali
specifically (7.7%). Northern Province has the lowest prevalence of obesity
(1.8%).
In 2019, the World Health Assembly extended the WHO Global action plan for
the prevention and control of NCDs 2013–2020 to 2030 and called for the
development of an Implementation Roadmap 2023 to 2030 to accelerate
progress on preventing and controlling NCDs. The Roadmap supports actions
to achieve a set of nine global targets with the greatest impact towards
prevention and management of NCDs.