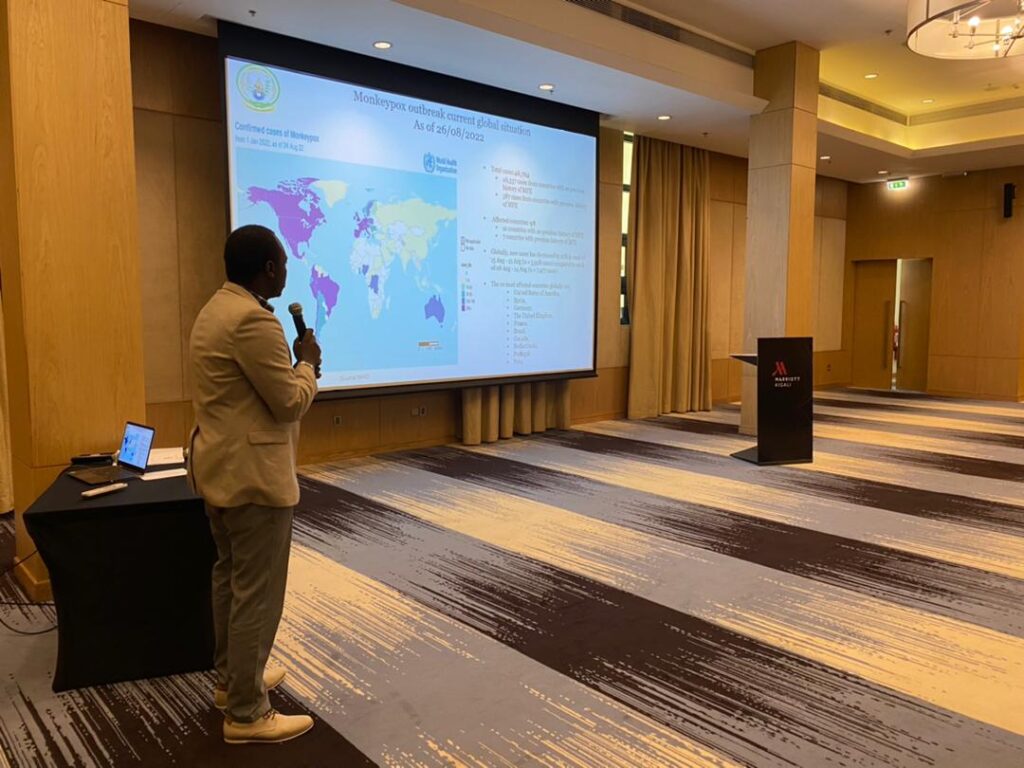 The ministry of health launches dissemination of the monkeypox preparedness and response plan contains, among other pillars of interventions, the surveillance, case management, vaccination and risk communication, The country has not registered a single case, but neighboring countries such as DR Congo, and some other African nations, have already recorded cases.

He thanks the experts for their great efforts said “Though we have yet to record Monkey pox in Rwanda, covid19 and Ebola have taught us that it is important to avail preparedness and response plans to outbreaks before they happen.”

In his opening remarks Director General of RBC Dr Claude Muvunyi said Covid19 taught us many lessons but the most important was the need to stay prepared even before the emergency starts.”

On behalf of the WHO Head of Emergencies Dr Lyndah Makayoto said that there is no room to be complacent as we in the African region are susceptible. This is why we are committed to working with Rwandan to bolster monkey pox surveillance and operational readiness.”

Monkeypox is a viral zoonosis (a virus transmitted to humans from animals) with symptoms similar to those seen in the past in smallpox patients, although it is clinically less severe. With the eradication of smallpox in 1980 and subsequent cessation of smallpox vaccination, monkeypox has emerged as the most important orthopoxvirus for public health. Monkeypox primarily occurs in central and west Africa, often in proximity to tropical rainforests, and has been increasingly appearing in urban areas. Animal hosts include a range of rodents and non-human primates.

The incubation period (interval from infection to onset of symptoms) of monkeypox is usually from 6 to 13 days but can range from 5 to 21 days.

The infection can be divided into two periods, the invasion period (lasts between 0–5 days) characterized by fever, intense headache, lymphadenopathy (swelling of the lymph nodes), back pain, myalgia (muscle aches) and intense asthenia (lack of energy). Lymphadenopathy is a distinctive feature of monkeypox compared to other diseases that may initially appear similar (chickenpox, measles, smallpox).

The skin eruption usually begins within 1–3 days of appearance of fever. The rash tends to be more concentrated on the face and extremities rather than on the trunk. It affects the face (in 95% of cases), and palms of the hands and soles of the feet (in 75% of cases). Also affected are oral mucous membranes (in 70% of cases), genitalia (30%), and conjunctivae (20%), as well as the cornea. The rash evolves sequentially from macules (lesions with a flat base) to papules (slightly raised firm lesions), vesicles (lesions filled with clear fluid), pustules (lesions filled with yellowish fluid), and crusts which dry up and fall off. The number of lesions varies from a few to several thousand. In severe cases, lesions can coalesce until large sections of skin slough off.