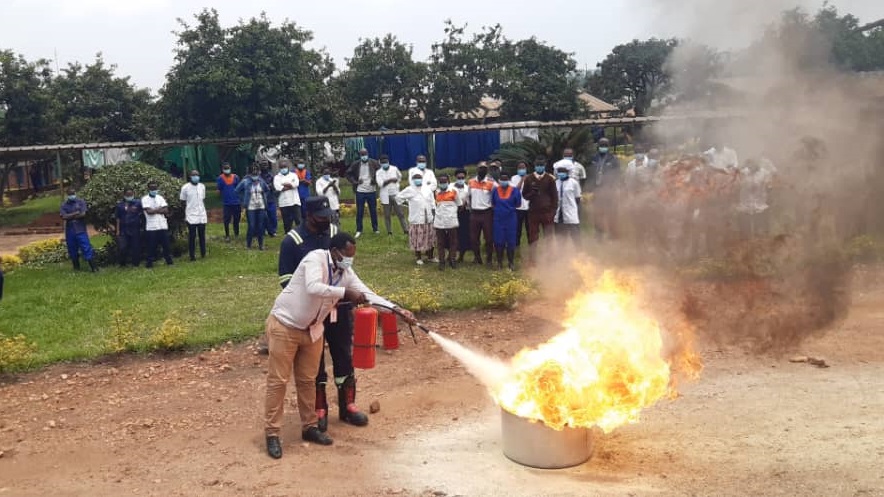 The Rwanda National Police (RNP) Fire and Rescue Brigade (FRB) fire safety awareness continued to Gatunda, Ngarama and Gahini hospitals in Nyagatare, Gatsibo and Kayonza districts, respectively, where over 300 staff were trained on how to fight and prevent fire emergencies.

On Thursday, February 10, the fire safety training was conducted to

They were introduced to causes of fire, components of fire, different types of fire extinguishers and how they are used, precautionary measures on cooking gas, fire drills and the procedures of evacuating people from the hospital in case of fire.

The training came after other similar outreach to enrich understanding of the staff in health facilities on fire components and mechanisms of preventing fire emergencies.

“This is an important training that gives the hospital staff are clear understanding on fire safety both at work and in their homes. Prevention is important to save lives and property from fire, which can result from human behaviour and at times lack of knowledge on safer use of electric appliances and skills to effectively respond to small fire before it spreads,” Dr. Ngabire said.

Assistant Commissioner of Police (ACP) Paul Gatambira, the commanding officer for Fire and Rescue Brigade, said that the ongoing awareness and training aims at equipping many people in Rwanda with knowledge and skills to prevent and overcome fire outbreak at homes and places of work.

The outreach is combined with inspection of facilities on fire safety and advising on precautionary measures.

Contacts in case of fire: