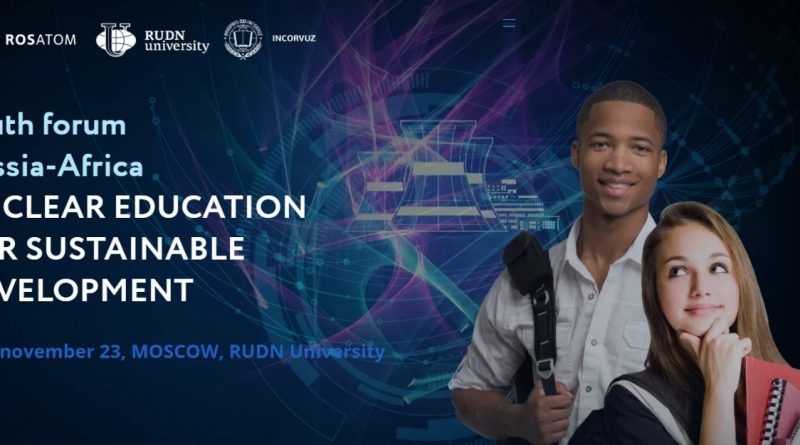 The event was dedicated to sustainable development through the promotion of nuclear education, which would make it possible to realize the full potential of young African people in high-tech fields such as science and technology. Larisa Efremova, Vice-Principal for international activities at PFUR moderated the forum, which took place in three languages: English, French and Russian.

During the plenary session, the hosts and distinguished guests of the forum discussed new forms of cooperation to unleash the true capacity of the African youth. There are roughly 400 students from 23 African countries currently studying atomic professions under the Rosatom scholarship programme in Russia. Moreover, public lectures at local schools and universities are held at very regular intervals to increase awareness on cutting-edge nuclear technologies, which have the potential to elevate current issues faced by the continent.

Practical training is also regularly provided on the basis of specially created resource centres of Rosatom’s sectoral enterprises. The representatives from the host organizations also highlighted the “Ambassadors of Russian Nuclear Education” project, in which African students play an active role in championing.

“We pay special attention to the African continent, which is undeniably a region of growth and strategic importance for us. We are already actively cooperating with more than twenty African countries. And it’s not just about exporting technology. We are building partnerships that will last a hundred years. Nuclear power projects are so large-scale that the relationship with partners is always more than just a “customer-supplier” relationship”, mentioned Nikolay Spasskiy, Deputy Director General of the International Activities Unit at Rosatom.

The plenary session was followed by a number of themed sessions (“Nuclear Education”, “Energy”, “Agriculture”, “Ecology”, “Nuclear Medicine today and tomorrow”), where participants could choose to attend the discussion topic of most interest to them.

Speaking during the plenary session Ryan Collyer, CEO of Rosatom Central and Southern Africa noted that nuclear energy has the potential to transform the socio-economic development of African countries, this through the creation of new industries, jobs, skills development as well as knowledge transfer in science and technology, thus changing the face of the continent and ultimately raising the standards of living of its population. He added that beyond power production nuclear technology offers vital solutions for healthcare, agriculture, mining and science.

“The African continent has everything at its disposal to become the next global economic powerhouse, while the Russian nuclear industry has the means to bolster Africa’s success. The first steps towards successful partnership have already been made, but let’s make sure that these partnerships grow from strength to strength and play an integral role in ensuring Africa’s ultimate success”, concluded Collyer.

The ideas and recommendation raised during the breakaway sessions were captured and will be included into a resolution to Rosatom and Ministry of Education and Science of Russia to improve nuclear training and educational programs on the African continent.