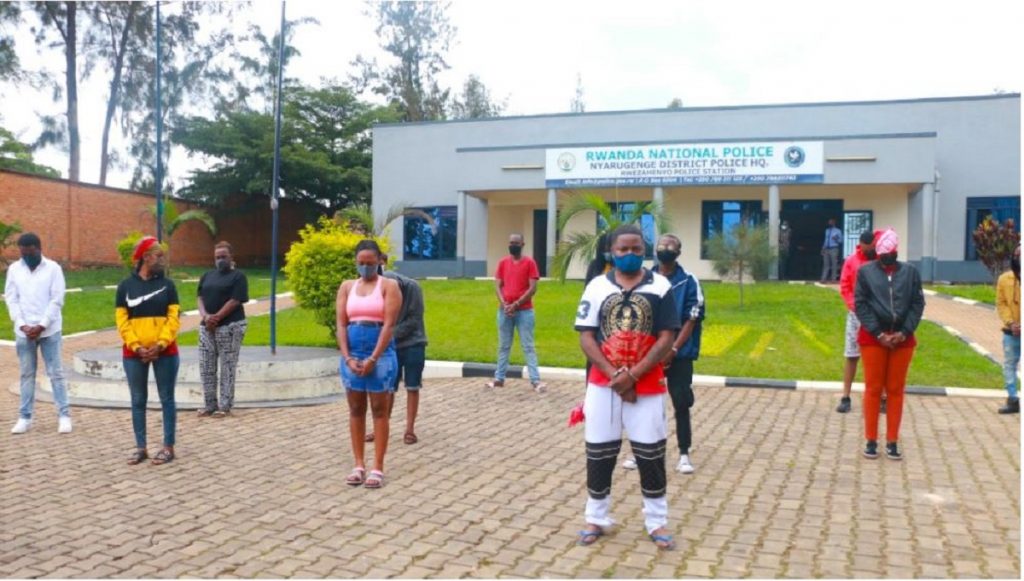 Rwanda National Police (RNP) has arrested 27 people in City of Kigali for holding house parties, contrary to the national directives on containing the COVID-19 pandemic.

The violators, all young people, had organised three separate house parties and were at the time found drinking.

Eleven others invited by their colleague identified as Said Iradukunda, were found drinking in the house located in Gasabo District, Remera Sector, Nyabisindu Cell in Gihogere Village.

Their arrest comes at the time when City of Kigali is under lockdown with movements only limited seeking essential or emergency services; while family visits and other social gatherings are prohibited as one of the measures to contain the spread of the COVID-19 pandemic.

One of the party organisers, Kamaro Felicien told the media at Nyarugenge District Police Unit, that he had invited four friends to his house where he stays with his colleague just to have a “good time together” but regretted his actions adding that he has “learnt a lesson.”

“Most of the friends that I invited are neighbours. I regret to have invited them to enjoy drinks together in this period of the pandemic even when we knew that such social events and home visits are prohibited. I have picked my lesson; I hope other young people out there will also learn from my experience, do the right thing and wait to enjoy their drinks together when they are safe from COVID-19,” Kamaro said.

Pancard Umuhoza is another party organiser, who was arrested alongside nine other youth in Nyamirambo.

“I personally know some of the people that succumbed to COVID-19 but I guess we tend to be complacent; sadly, I did not even think that one of those I invited could be infected,” said Umuhoza.

“It was about 8pm on Sunday when the Police received information about groups of youths that were engaged in separate house parties. Some of them were holding birthday parties for their colleague which is equally prohibited ” CSP Africa said.

He thanked residents, who continue to observe the directives and health guidelines in particular as well as those who support the police in enforcement through information sharing about violators and supplementing national efforts to contain the spread of the virus.

Directives are very clear on every aspect; visits and all events which include such social gatherings are prohibited as directed by the Cabinet meeting of January 18. Visits can only be permitted after assessing the purpose and upon approval by Rwanda National Police through the available movement clearance platforms.”

CSP Africa said that all the 27 people, who violated the directives, will be fined accordingly, and subjected to COVID-19 test at their cost.