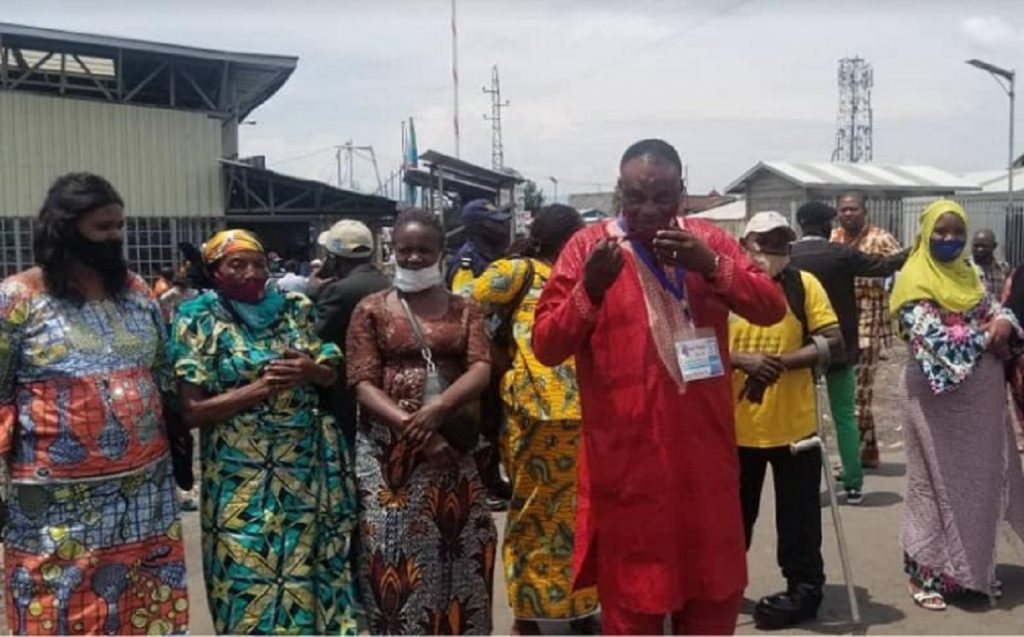 Rwandans who were already cross-border traders in Goma City, have the opportunity to continue their trade while complying with the new regulations in place to prevent the COVID-19 pandemic.

It is a directive that targets Rwandans who work in cooperatives and only their representatives are allowed to cross instead of traveling in large numbers. The directives warn individual business operators to cross as they used to do before the COVID-19 epidemic reached Rwanda.

During a meeting between Rwandans and Congolese living in the city of Goma who are already doing cross-border trade, they agreed on how they will work on the border to avoid Covid-19 and avoid losses that would prevent them from returning home after eight months of inactivity.

Babonampoze Moussa, is the director of the KOTIHEZA Cooperative that transports food products to the city of Goma and the chairman of the Association of Cooperatives that exports goods to the City of Goma.

He said the meeting of traders crossing the border between Goma and Gisenyi had some consensus, and would resolve the border issues and help them avoid the COVID-19 epidemic.

“We have met with the traders in Goma to discuss the situation, agreeing to send them the goods as the Congolese need to tell us and supply them, and we will meet their needs and reduce the flow of goods to prevent the outbreak,” he said.

Babonampoze says they have discussed how cross-border trade is continuing and without much traffic, which will reach out to those who do business with a basin or a basket.

“The participants wanted 500 people to cross the border, including 250 from Goma and 250 from Rwanda, but as in Rwanda, our priority is to export more goods than to send more people,” he said.

Babonampoze says they have usually decided to send cars or bicycles for people with disabilities carrying the goods accompanied by one trader, and for those who trade in the basins and baskets should be associated.

“To avoid disorder, small business operators are required to join groups, and then the group has to trade and register. The group puts goods on bicycles or motorcycles that carry luggage accompanied by one person who sells them and ends up bringing money to others, “he said.

The meeting between Rwandans and Congolese took place on the border in the landless. What was good to the traders was that they were going to reopen the activities that had been stalled, but they were skeptical about compliance because if there were any mistakes it would increase the risk of the pandemic.

Rwandan traders say they are happy to resume shipments to Goma; as Congolese goods have been looted or lost.

Babonampoze says that if the business starts, it will be a good time to pay for those who have been abducted, and in the case of Congolese who have come to Rwanda to relocate to Goma, they will not do so again.

“They will not do it again because things are going to be done in cooperatives now, maybe they will do transport but they will not bring us losses again,” he said.

Rwandans exporting goods to the city of Goma in September 2020 told Kigali Today that Congolese made them to lose Rwf 100 million as a result of importing untaxed raw materials to Rwandans, whose owners have been fined by the Rwanda Revenue Authority and are well aware that they have not crossed, adding that Rwandans were requesting Congolese to bring them goods instead of importing them as required, they included those that were not requested, and those who imported them would be fined.

The small border between Goma and Gisenyi will be used for small cross-border trade, and passers-by will be tested for COVID-19 and given results in 30-minute for free.

The tests will be applied in 14 days, while those who cross the big border will be given tests that give results within 24 hours.

The border between Goma and Gisenyi is one of the most widely used borders on the African continent, where before COVID-19 was used by 50,000 people a day.

Since it was closed in March 2020 due to the COVID-19 epidemic, it has now been reopened and used by fewer than a thousand people a day.