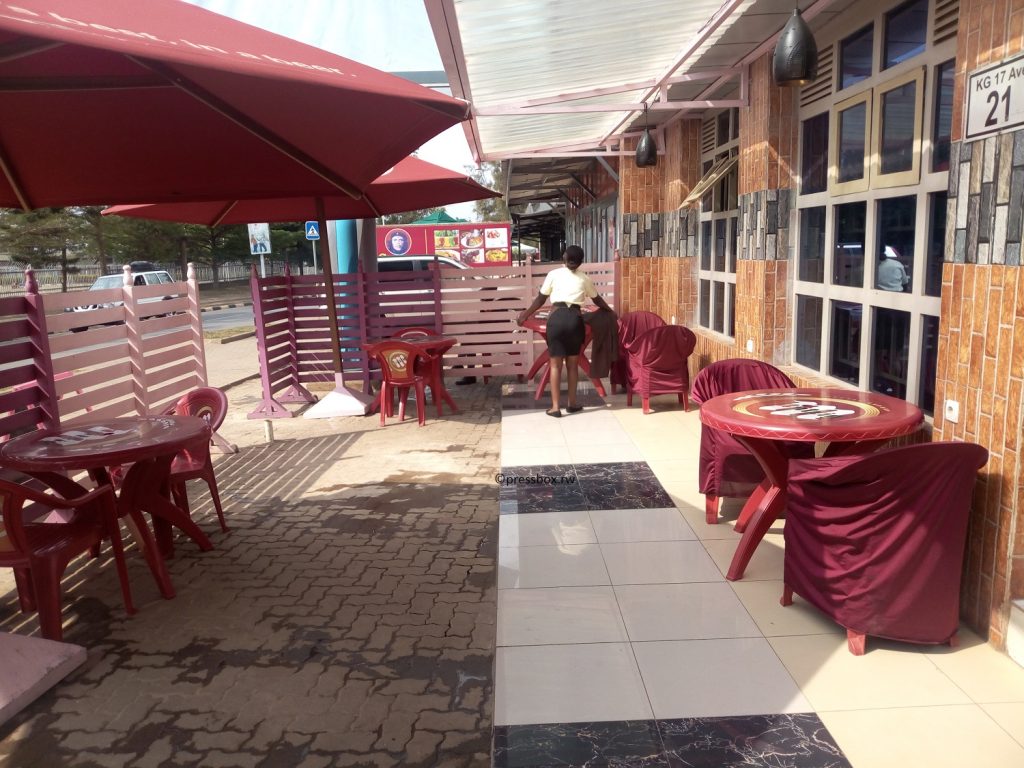 Female bartenders in Rwanda lament enduring hard life amid joblessness subsequent to COVID-19 effect that detained bars in a long-lasting closure. Since mid-March 2020, Rwandan people have been facing COVID-19 effects relatively to measures against the spread of the pandemic which, generally, caused job insecurity.

Among those taken measures, there is lockdown which has affected most of the people in general, as they could not go to work as usual. As it stands, most fields of work have been given a go ahead though it is not as normal as before the pandemic appeared on Rwandese territory.

Bars are among services that are still closed, causing joblessness for workers in that sector, including bartenders.

Pressbox reporter went to different parts of the country to see how female bartenders have been affected by COVID-19 effect and the way they are coping with joblessness caused by the pandemic.

“My living conditions are insecure since I can’t earn anything. I spend my whole time at home. In fact, it is not easy at all. Rent payment is almost impossible in this situation. I can’t care enough for my lone child. I prefer starting a small business to save my life, but I’m short of investment to do so. I can sell fruits to make money for survival, if I get any support.” Said Margaritte Mutimukwe, a bartendress in Gitega Sector of Nyarugenge District. Before she stood up for interview, Mutimukwe looked physically weary, in a squatting position with a low voice, apparently exhausted.

Another female bartender whose living conditions have been affected by COVID-19 effect – as bars are among services that have remained closed in the country – is Henriette Wibabara, whose job was based in Kimisagara Sector of Nyarugenge District, who said: “Being without a job is hard to bear. I’m now not able to feed well my kid, and make sure sanitation stuffs are available at home. Being a single mother & living with my mom require my contribution to the wellbeing of the household. So, I wish I got support from the government or any other donor to make sure I earn any amount of money to live on.”

Furthermore, Anathalie Mukanoheli, a bartendress in Muhanga District, Southern Province said: “My living condition is obviously unpleasant. I have tried in vain to find another job. Before COVID-19 outbreak, I was used to caring for my siblings with the monthly salary worth Rwf60k from my workplace, but now it’s a struggle to find even what to eat. As you see, I dwell here with my young sister who is also jobless. We sometimes spend a daytime without eating.”

With a hopeless facial expression towards the interviewer, Uwimana, whose job was to serve beer at a bar in Rwamagana District of Eastern Province, expressed her disappointment amid being without a job. “I have become nomadic because of job loss. With my job before COVID-19, I could make up to Rwf70k monthly. I am now living with my friend after I relocated from my former residence as I was not able to pay for rent. I besought some of my relatives to temporarily adopt my two children whom I was not able to care for, amid joblessness”.  She described with tears in her eyes. The average of their monthly income is between Rwf50k and Rwf70k per month.

Other bartendresses who, unfortunately didn’t allow us to record their identities and testimonies said they switched to sex work as part of self-protection to retain survival.

All bars will remain closed nationwide, according to the recent statement on Cabinet resolutions of September 25, 2020.

Speaking to Pressbox about supporting people whose jobs are still on hold due to an extended lockdown to some services including bars, Sheikh Hassan Bahame, the Director General of Social Affairs and Community Development in the Ministry of Local Government (Minaloc) said: “It is obvious that some people have lost their jobs, and by now they are living in vulnerable conditions. But, telling you that the government will deliver something to support such jobless individuals would be a lie, because the country itself has been affected by the pandemic’s effect. COVID-19 occurred unpredictably, and Rwanda made all possible efforts to halt its spread amongst people.”

Bahame advises bartenders to engage in searching for new job opportunities and create viable businesses in order to survive amid the hardship era of COVID-19.

“Most of those girls (bartenders) are still young, they should turn their minds and look for new jobs, be it: street sweeping, assisting masons or any other occupation which could make them earn money to live on. Others can initiate projects and attract investment firms like BDF to avail startup costs.” He indicated.

Earlier during countrywide lockdown as COVID-19 preventive mechanism, it had become a custom that the government used to support vulnerable households with foodstuffs. By now, when a certain family feels endangered with food scarcity, in need of emergency relief, it will contact the Sector-level officials to bid for the possibility of getting support, according to a reliable source from the City Of Kigali.

Stakeholders turn up for possible support

According to Jean Christophe Cyubahiro, General Secretary at Trade union of Workers in Hotels, Restaurants and Bars in Rwanda, there is a possible solution to help those who are willing to startup businesses, which is, as proposed, forming cooperative and attract investors.

“We are planning to possibly form cooperatives for bartenders, in which we will connect them with investors to help them start businesses of their choices; for instance, some may have skills in cookery and invest in catering. We are about to start negotiations with investment firms in the country, and when the agreement is reached, we will immediately bring bartenders together in different cooperatives to profit from the startup funding in terms of loan.” He said.

In Rwanda, nongovernmental organizations (NGO) are used to helping the government sustain the wellbeing of the citizens.

Aimable Mwananawe, National Coordinator at Ihorere Munyarwanda Organization (IMRO) said that there are plans for projects targeting people impacted by COVID-19 effect, in which female bartenders are considered.

“That category of workers is obviously very needy in this time of COVID-19, because since March they have not been earning anything. And unfortunately, this category was not among the ones that the coalition of NGOs supported during the recent project for vulnerable groups in different districts. But, for now IMRO has started looking for what to do for such a category, through partnering with stakeholders including the government.” He stated.

Mwananawe calls on different sponsors, fellow partner organizations to take action and join efforts to support that category of people – whose job relies on serving in bars – having by now become vulnerable due to the pandemic’s effect.

Apart from women who serve drinks in bars, the same case lies in those who work in hotels whereby there have risen setbacks including job losses and salary cuts, all resulting from limited service due to COVID-19 preventing measures.

Job security in Rwanda was, generally, affected by the lockdown, with the new report released in August (Impact of COVID-19 on Labor Force) by the national institute of Statistics of Rwanda (NISR) indicating that In May 2020, the unemployment rate was estimated at 22.1 percent, comparing to 13.1 percent of unemployment rate in February 2020, before first case of COVID-19 was recorded in the country.