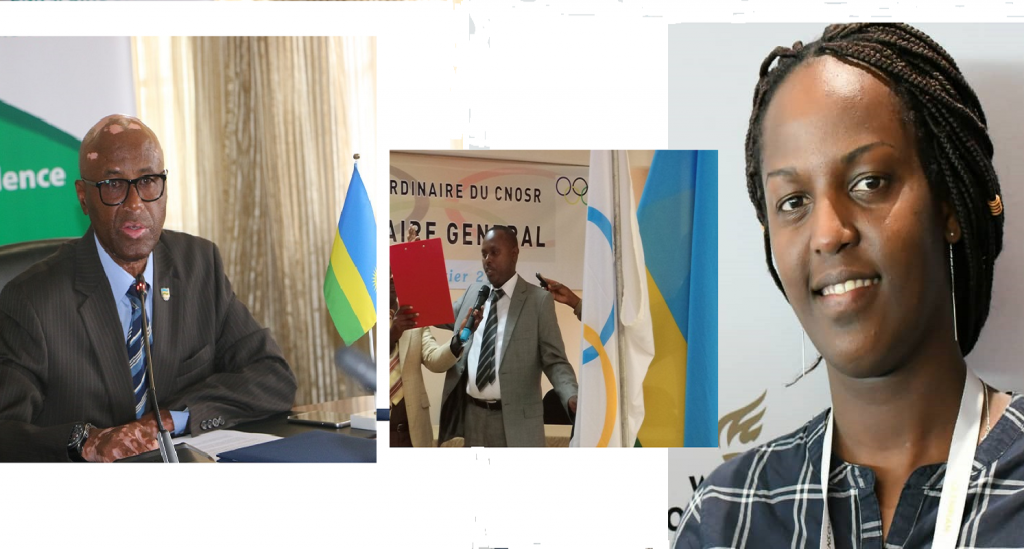 Retired swimmer Pamela Girimbabazi was elected president of the local swimming governing body on 26th January, 2020, becoming the first woman to head a sports federation in Rwanda. But, until now no handover between former and current executive committees, due to the bygone staff refusal as reports confirm.

Impamba sources reveal that the reason for former executive committee’s snub to hand over is resistance from leaving the leadership throne, and they are backed by the President of Rwanda National Olympic and Sports committee, who expects reciprocal help when his turn at election comes in 2021.

-In 2019, a group of famous swimming athletes wrote an official letter to the Ministry of Sports and gave a copy to RNOSC highlighting the problems hindering the Rwanda swimming body including blunders committed during the leadership of Samuel Ufitinema Kinimba in his 10 years tenure.

In an interview with impamba.com some of the above-mentioned athletes said that they were fed up with the headship of Samuel Ufitimana Kinimba who was accused of using his power to coddle some few clubs including ‘Thousand Kilos’ to which he belongs.

The problem endured because, according to sources, RNOSC boss Munyabagisha was always by the side of Kinimba.

– New swimming body president Girimbabazi wrote to the presidency of RNOSC requesting a mediation between Philbert Rutagengwa (who had served as interim president after Kinimba’s resignation) and the current committee for the sake of the handover turn, but RNOSC did not solve the problem.

– Impamba.com understands that before January election Amb. Munyabagisha tempted to mediate Girimbabazi and the side of Kinimba (who resigned amid taking abroad the national team without informing the ministry of sports) begging the former mentioned to omit the presidency position and be given the General secretary position instead, but contrary, she would deny the proposal as she felt the potential in herself to lead the federation.

Other reports say that Amb. Munyabagisha himself declared that he disrespects the executive committee of RSF as headed by Girimbabazi, considering it as a club not a federation.

– On October 7th, 2019 there was a seminar at RNOSC, assembling representatives from all swimming teams, and the meeting decided that all teams with legal status are allowed to take part in elections, but later a group opposing the fresh candidates would write to RNOSC snubbing the election results.

– Philbert Rutagengwa did not explain by letter the reason why he withdrew the candidature on the post of presidency.

– On 28th January, 2020, RNOSC wrote to Clement Muhire who had chaired the electoral commission confirming to have received the report, but evoking as well to have received another letter from six teams claiming that the election was illegally conducted that it should be repeated.

– On 31 January, 2020, Clement Muhire replied to Munyabagisha with a letter explaining the legal process which was followed during election.

From January 2020 when she was elected, Girimbabazi and her whole staff have not yet started to work as no handover was done. Until now, the new executive committee is unknown to the international swimming governing body (FINA), because the recognized official email still belongs to the bygone committee, and this results in hindering the development of swimming activities and beneficiaries which are athletes.

“I did not snub the handover. I just wanted to firstly see the problematic solved.” Said Rutagengwa who is accused of ignoring the handover.

According to Amb. Valens Munyabagisha who is said to be at the heart of stoking the row, all allegations are unfair.

“It’s not a matter of persuading for being voted for! One vote cannot make me act illegally. The problem is that the federation has been inactive for the whole year. We approached them to mediate and settle the situation in a period of one year but when it came to election time there occurred a misunderstanding.” He explained

He added that the issue is now under an arbitration committee which is studying well the case to come up with an accurate report on whether the election was legally managed or not.