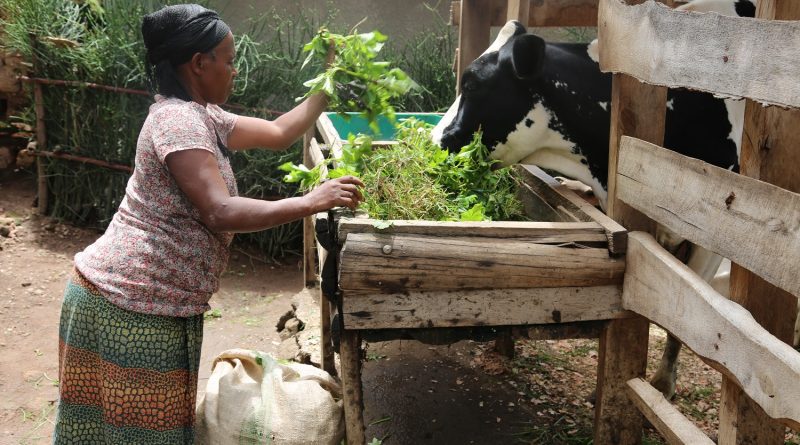 Cattle farmers confess a significant increase in milk production, thanks to the Rwanda youth in Agribusiness Forum (RYAF) and the Rwanda Dairy Development Project (RDDP) which is run by IFAD and the Government of Rwanda.

It is a project implemented in different Milk Collection Centers (MCCs) countrywide whereby RYAF has since 2018 provided a qualified vet – associate manager at each center, and  by the sponsorship of RDDP and the Ministry of Agriculture (MINAGRI), cooperatives at MCCs would be facilitated to get appropriate equipment for milk value chain, infrastructures where needed and advice-giving trainings dedicated to households for the sake of qualitative dairy farming.

Different households have benefited from the Rwanda Dairy Development Project (RDDP), according testimonies from cattle farmers

Rose Umulisa, a cattle farmer and milk supplier in Kinazi sector, Ruhango district said: “RYAF has guided us by trainings on best ways of farming, through proper cattle feeding, construction of appropriate cowsheds and cleanliness in the milking area.”

She, furtherly, claimed for more sensitization so that all farmers could be reached

Simeon Habimana, another cattle farmer heading DUFACO Gishari cooperative in Rwamagana district said: “This cooperative had faced difficulties before RYAF sent us a technician who helped us increase milk production from collecting just thirty liters of milk to at least 400 liters per day.”

“RYAF has helped us a lot in breaking up disorder which had been persistent at our Milk Collection Center (MCC), whereby other internal workers have been trained on technical service to daily suppliers” He hinted

Vincent Ngirinshuti a cattle farmer and milk supplier at Rusatira MCC in Huye district said: “We are now paid regularly than before the project came in. RYAF helped us get milk tanks on good prices and cow medicines on time”

Associate managers directed by RYAF at Milk Collection Centers (MCC) have their view:

Eric Nshimiyimana of Gahengeri MCC said: “Here was no service when I reached because they had no equipment, and by then I started advocacy, finally we got to be organized and started collecting milk. We trained 300 farmers on cow feeding, cattle diseases prevention, and cowshed construction”

“We increased milk production from zero to collecting 42.000 liters per month.” He added

Marie Claire Uwineza of Gishari MCC said: “When I got here no cattle pharmacy was there but by now, we have it.  Farmers supplying milk came from 17 up to 280 per day”

Ildefonse Nyandwi Associate manager at Muyira MCC said: “In partneship with RDDP and RYAF we were given a milk detector machine and car for milk transport to dedicated markets”

Nyandwi recommended that the project should be maintained and broadened as its importance is noticeable.

RDDP project, which aims at raising rural incomes by intensifying dairy production and improving market access, was established in 2016 on a six-year duration.