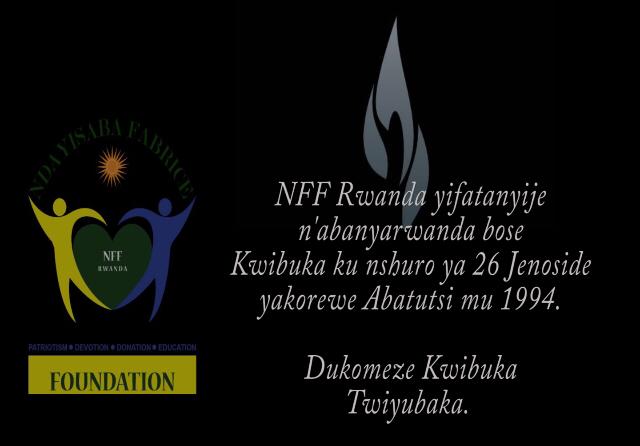 Miss Rwanda 2020 Naomie Nishimwe and some famous local football players including Lague Byiringiro and Peter Otema have shared their messages amidst a ceremony organized by Ndayisaba Fabrice Foundation (NFF) for the memory of children victims of the 1994 Genocide against the Tutsi.

The ceremony was held on Thursday, April 9 through social networking channels including WhatsApp, Twitter and Instagram in order to respect social distancing measure among regulations regarding the prevention of the spread of COVID-19 pandemic.

NFF Rwanda is a local nonprofit organisation based in Kicukiro District that brings together children during school holidays to keep them busy, emphasizing mainly on sports, education and culture to build a bright future for the young generation.

Message providers commonly based on consoling the Genocide survivors as well as calling for unity and solidarity to build the bright future of the country.

“Let us remember and unite, avoiding to be overcome by grief. As young generation, let’s build our nation together by sustaining the achievements. With unity, we shall attain the targeted development as Rwandans.” Said APR FC forward, Lague Byiringiro.

Peter Otema, currently with Bugesera FC but having played as a forward for different clubs in the country including Rayon sports, said: “Youth, the power of the nation, we are the future Rwanda, so let’s stand together and build a new Rwanda, fighting against divisionism.”

Apart from soccer characters, another celebrity who took part in the event is Miss Rwanda 2020 Naomie Nishimwe who called on youth to learn from history and build a better Rwanda with positive vision.

“We, the young generation, are the power of our country, so let us firstly learn from the history, fight the genocide ideology and build the nation with bright vision. Remember, Unite and renew.”  She said.

Fabrice Ndayisaba, the founder of NFF Rwanda, called on young generation to contribute determinedly to the development of the country filling the gap caused by the loss of innocent Tutsis during the 1994 Tutsi Genocide.

“NFF remembers kids who were killed during the 1994 Tutsi Genocide. We hereby encourage children and the youth in general to keep remembering the lost ones, and getting motivated to work hard in serving the country.” He said.

This 10th annual commemoration ceremony organized by NFF Rwanda attracted among other participants: leaders from different Sectors of Kicukiro District (where the foundation is based), schools officials, administrators from Ibuka, Vice Mayor of Bugesera District in charge of social affairs Ms. Yvette Imanishimwe, music artists among others.