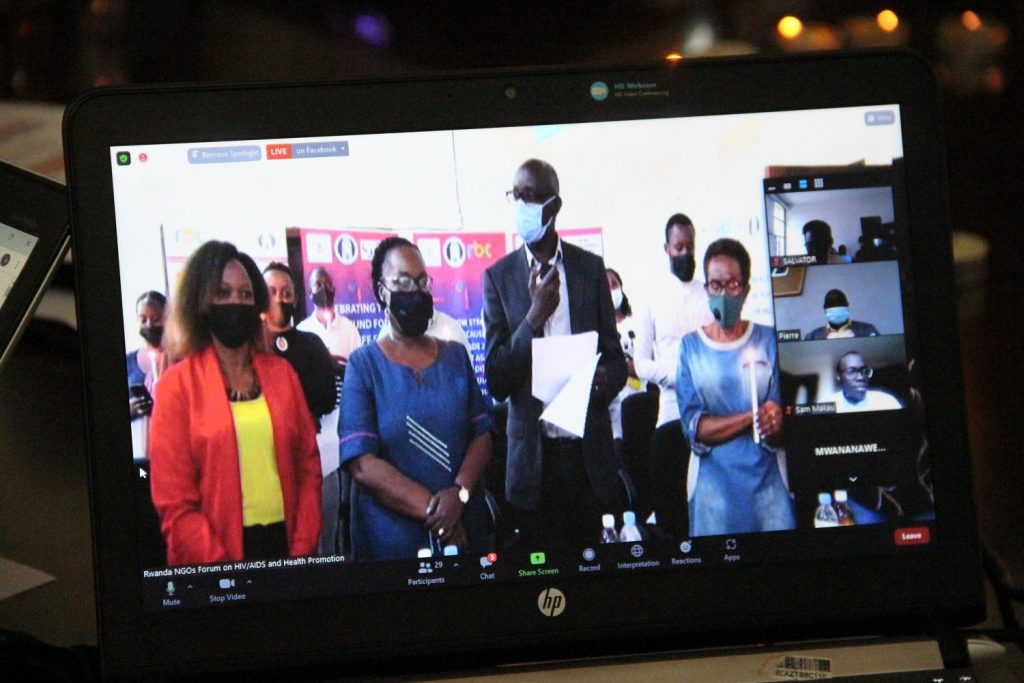 Rwanda has received the torch caravan from Burundi, as the Global Fund marks the 20th anniversary.

The caravan which will pass through 20 countries in Africa on its way back to South Africa in December 2021, was received in Kigali on September 7, 2021, and the event was privileged by different organizations’ representatives – partners of the Global Fund in saving lives by fighting the epidemics of HIV/AID, tuberculosis and Malaria.

“The Global Fund has had huge support on programs related to HIV/AIDS, TB and Malaria. It has been a major contributor, partner in the health sector development in Rwanda. And currently, the Global Fund is investing into COVID-19 response, and we have got grants to deal with the pandemic,” said Innocent Cyiza, Permanent Secretary of Country Coordinating Mechanisms of the Global Fund in Rwanda.

Speaking to the media amid the event, Andrew Gasozi Ntwali, Community Support Advisor at UNAIDS said: “This torch means a lot in terms of the contribution of the Global Fund in saving communities, saving people, saving lives. We have seen people are no longer dying because we have access to treatments, preventions, and all the healthcare support that we need. So, it means a lot to all of us, to all the communities whose lives are saved.”

With the Global Fund Partnership, 38 million lives have been saved in HIV/AIDS, TB, and malaria since 2002, including six million in 2019.

According to Felicite Rwemalika, the Chairperson of the Rwanda NGOs Forum on HIV/AIDS and Health Promotion (RNGOF on HIV/AIDS & HP), this year’s celebration reminds the world how dying of HIV/AIDS is no longer a worry.

“Today’s torch has a lot of meaning especially concerning people’s lives. As we all know, before the Global Fund, people used to die like everything. But thanks to the Global Fund, we are celebrating 20 years where people’s dying is not an issue today. There are people who are born with HIV but now you see them at the age of 20, they are CEOs, important people that we are having in the country. So, this torch reminds us that there is still hope for longer life even after being infected,” She said.

Among other organizations, beneficiaries of the constant funding of the Global Fund include International Community of women living with HIV/AIDS, especially in East African Region (ICWEA).

Isabelle Nizeyimana, Country manager of ICWEA-Rwanda said: “This means hope and life to me. The Global Fund has made a tremendous contribution to the wellbeing of communities, especially in supporting education for the children of HIV/AIDS victims and sustaining lives of people after being diagnosed of HIV and other diseases like Tuberculosis and Malaria.”

The Global Fund – which is an international financing and partnership organization – invests US$4 billion a year to defeat HIV, TB and malaria.

“Twenty years after our birth, the world faces a monumental health challenge, and others will inevitably follow. Once again, our strength lies in our partnership. We have changed the story before. Together we must step up and write another chapter in the story of fighting deadly infectious diseases,” reads a statement from the Global Fund on its 20th anniversary celebration.

By the end of 2030, the Global Fund expects to have helped to eliminate malaria in at least 35 countries.